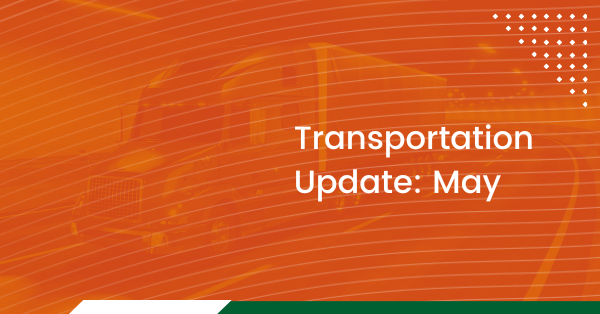 This month, we saw the national diesel average drop 4.2 cents, the House Panel approved the water bill, and truck tonnage levels trend down. In addition, the truck manufacturers group files a lawsuit to seek more time for new CARB regulations and more.

Check out April’s trending transportation update on the shipping industry if you missed it.

The EIA’s weekly survey showed diesel prices drop by single digits in most of the ten regions, with the Gulf Coast experiencing the most significant drop at 7.9 cents per gallon.

The national average price for gasoline has increased by 10.2 cents a gallon, making the average cost per gallon $4.593.

Phi Flynn, an oil analyst with The Price Futures Group, told Transport Topics that gasoline inventories have declined while diesel inventories have risen slightly. As a result, refiners are ramping up production for diesel week-over-week, which can help prices go down.

“But the trajectory of prices are still high,” Flynn said. “There’s still a lot of upside risks. So I am looking for the market to get a little bit of a cooling-off period, hopefully after the Memorial Day holiday.”

Learn more about the recent drop in diesel prices.

The ATA’s not seasonally adjusted (NSA) index is the change in tonnage hauled by fleets before any seasonal adjustment, which fleets benchmark their levels with, was 114.1, which is 7.4 percent lower than March NSA.

“After eight straight gains totaling 6.9 percent, for-hire tonnage finally slid back in April. However, despite being the largest sequential drop since August 2020, the index was still above where it started in 2022 and a year earlier,” said ATA Chief Economist Bob Costello.

On May 27, the Truck and Engine Manufacturers Association (EMA) filed a federal lawsuit stating that California environmental regulators have failed to give manufacturers enough lead time to meet the state’s new emission standards.

The lawsuit states that the federal Clean Air Act requires that manufacturers be given “four full model years” of lead time before new emission standards become effective. However, the manufacturers said that the California Air Resources Board (CARB) only gave them two years.

This lawsuit ensures that CARB follows all the rules to allow enough time for engine manufacturers to redesign, test, and build the engines to comply with the new regulations, which will maximize the likelihood of a smooth and successful implementation.

On May 18, the U.S. House of Representatives approved the legislation that would authorize dozens of projects and studies under the purview of the Army Corps of Engineers, which is called the Water Resource Development Act of 2022.

This act would approve nationwide dredging, commercial navigation, and flood control projects. The Water Resource Development Act would authorize 16 shoreline protection and flooding projects. In addition, it will pave the way for 72 feasibility studies on corps projects on reservoirs, commercial corridors, and alternative sources of energy.

“I am pleased to pass a fifth consecutive, bipartisan WRDA bill out of committee — now headed to the House floor — to invest in our ports, harbors, waterways, and other key water resources infrastructure,” states Transportation and Infrastructure Committee Chairman Peter DeFazio.

The Water Development Act of 2022 is said to help strengthen the power of our coastal communities, sustain U.S. jobs and provide critical improvements to corps projects. DeFazio says, “It will continue to provide federal resources to rural and urban communities and help communities most vulnerable to climate change to prepare for its impacts.”

Talk to an Expert

We have the capacity to fill the gaps in your supply chain with our extensive carrier network and custom TMS that lets you stay on top of every load.