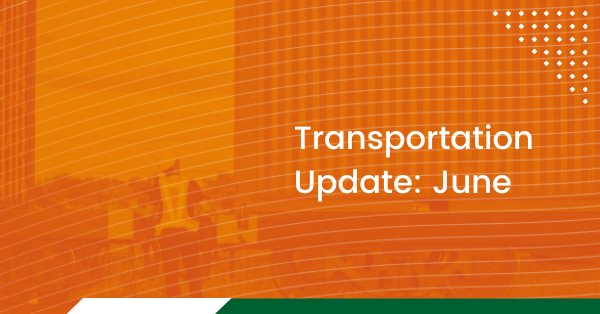 This month, we saw House transportation leaders pressing for freight rail safety, ports reporting record volume on both coasts, and trends moving towards higher transportation rates. Also, a potential recession and supply chain bullwhip are colliding. Check out May’s trending transportation update on the shipping industry if you missed it.

This month, the Federal Railroad Administration announced a nearly $400 million grant for consolidated rail infrastructure and safety improvements. This funding will go towards 46 projects to modernize railways and supply chains, reduce congestion, and transport passengers and goods.

The railroads’ subcommittee discussed safety concerns about freight rail operations. Democratic Representative Donald Payne of New Jersey addressed the freight industry losing a lot of its workforce due to the demanding conditions.

“The freight rail industry has lost nearly a third of its work in the past eight years. The workers who remain report they are being worked harder, with longer and more unpredictable hours,” said Payne. “They say these conditions are worsening fatigue and making an industry that’s inherently demanding even tougher to work for.”

In the future, representatives and workers hope for a world-class rail system that is quick and easy while also reducing pollution and traffic for people on the road.

Learn more about the discussion on freight rail safety.

Weaker conditions are ahead in the coming months, so freight brokers and carriers should prepare. Most people look at COVID through the rearview mirror, but many companies continue to recover from the damage caused by the pandemic. In the current market, a slowdown in consumer spending caused by inflation and a possible recession will significantly impact freight demand and prolong a stockpile drawdown.

In the bullwhip effect, retailers are likely to have a surplus of inventory. The rise in inflation rates started back in February when Russia invaded Ukraine. Since then, inflation rates have been the highest since the early 1980s.

Along with big retailers, many less-than-truckload (LTL) carriers are slowing down. LTL carriers typically are the last part of the market to slow down and one of the first to recover. The inflation rates have an impact on every aspect of the logistics industry. In the years ahead, carriers all over the country will work to recover from this slowdown.

Even though higher interest rates turn consumers away, there is more of an impact on the transportation industry. The Federal Reserve announced interest rates would rise by 0.75 percentage points earlier this month.

With this announcement, Daniel Son, head of global banking at U.S. Bank, shared his thoughts on the rising interest rates. He said the increasing financing costs would also raise inventory carrying costs, adding to stresses in supply chains—if companies carry less inventory to tamp down costs.

“When interest rates go up, then there’s a correlation that inventories actually go down” when companies can’t pass along those higher costs to customers, said Son.

In addition to the increased cost of inventory’s impact on consumers, it could also significantly impact trucking companies that already operate on a thin line. This transportation update could also lead to a reduction in available trucks and higher fuel rates.

The industry will do what it can to overcome these effects and become balanced yet again.

In May, the nation’s busiest facility, the Port of Los Angeles, had its third-busiest month on record. That month, they processed 967,000 twenty-foot-equivalent (TEU) containers. Just five months into 2022, Los Angeles has already processed more than 4.5 million TEUs, equal to last year’s record-setting pace.

Gene Seroka, executive director at the Port of Los Angeles, shared his thoughts on the strong demand and what to expect in the future.

Not only did Los Angeles have a good year, but other ports in the United States also had similar results.

The Northwest Seaport Alliance, operating facilities in Seattle and Tacoma, processed 325,740 containers in May. That month was the second busiest of 2022 for them.

“Our S.C. Ports team, maritime community, and logistics partners have made significant progress on our berth and terminal fluidity during the ongoing supply chain challenges,” said Newsome.

Learn more about the record highs for ports on both coasts of the country.