Home » Blog » Panama Canal Expansion: Everything You Need to Know

Panama Canal Expansion: Everything You Need to Know 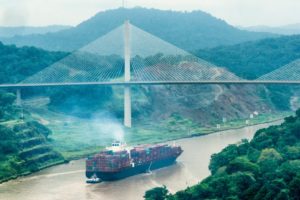 History of the Panama Canal

During the 1800s, businessmen didn’t have an efficient or quick way to ship goods between the Atlantic and Pacific coasts. The British proposed a

In 2006, the Panamanian government authorized the first major expansion of the Panama Canal since it opened in 1917. The expansion is set to be complete in 2016. (As of April 2016, the project was 98% completed). The expansion is expected to double the capacity of the canal.

The Panama Canal is an important link to global trade, accepting an estimated 5% of the world’s total cargo volume. It takes a ship about 8-10 hours to make its way through the canal. The canal serves over 140 maritime trade routes to over 80 countries. American ships use the canal the most, followed by China, Chile, Japan, Columbia and South Korea. Every vessel must pay a toll based on its size and cargo volume. Tolls for the largest ships can run as high as $450,000.

US Marine Transportation Infrastructure and Efficiency

The US freight transportation network includes almost one hundred sea ports. Sea port activity accounts for 26% of the US economy. They are vital to the American economy. They deliver goods to consumers, export cargo, and create jobs. 23 million people in the US are employed because of port cargo activity.

The United States has about 12,000 miles of inland waterways serving 38 states that are used for commercial transportation of goods. USACE maintains and regulates American waterways. The Panama Canal’s expansion will severely impact ports in Louisiana and Mobile Bay. Those ports handle large volumes of bulk commodities and the utilization of America’s water system could provide a cost-effective alternative to truck and rail transportation.

US ports handle most overseas goods traded between the US and major world economies. In 2011, the US Census Bureau data said that 99% of US overseas trade in tonnage was handled by US ports and 1% was transported by air. Today, a typical US cargo import will have traveled thousands of miles from its origin, switched transportation modes at least 3 times, and been briefly stored at a warehouse or distribution center before arriving at its final destination.

Lower transportation costs associated with the expansion of the canal could increase export volumes because of lower US-produced commodity costs. One study indicated that an all-water route between Northeast Asia and US Gulf ports served by larger vessels could result in a 13% cost reduction on transportation costs.

How the Expansion Affects US Ports

As one of the largest construction projects in the world, the expansion of the Panama Canal is expected to impact US ports and infrastructure.

It’s predicted that freight will shift to Gulf Coast ports, creating an opportunity for shippers to utilize the middle of the country, explore new transport options and open trade with other markets. Shippers might take advantage of cost-competitive transit, by moving on water instead of on land, with the ability to move more goods at a single time. Since the new canal can handle larger ships, it’s predicted that US ports will increase economies of scale for shippers and consignees, and reduce per-unit shipping costs.

A report by the US DOT and Maritime Administration advises that the extent of the effects of the Panama Canal expansion will depend on a number of factors, including: the capacity of individual US ports and their related infrastructure, the response of shipping companies to port and inland infrastructure capacity development, the adaptation of supply chain management methods that take advantage of scale economies, and the allocation of cost savings among domestic and foreign players.

As larger ships frequent the canal, there will be greater demands on port terminals. In order to achieve the cost savings made possible with larger ships, time spent in ports must be limited, and workers will have to handle more containers per vessel, per hour.

US ports aren’t the only ones facing operational changes. Rail will face operating challenges. Usually cargo, apart from petroleum and other bulk commodities, is imported in containers through seaports, then distributed by road and rail. With more volumes of shipments arriving, demand will increase for rail, specifically routes between ports and inland drop-off locations. According to the report, increased rail volume per ship would create sharper peaks in the demand profile increasing the potential delay for some intermodal cargo. Rail terminals may require more storage capacity to support larger volumes and higher demand, and need higher-capacity container handling equipment to efficiently dispatch larger trains.

Trucking will also feel the effects of the canal’s expansion. Trucking is the primary mode of transportation serving most markets close to ports. The cost of fuel, transloading, last mile services, regulations, and the environment will play a significant role in how the expansion project influences trucking. Port terminals will have to increase the amount of trucks they can handle by expanding physical facilities and speeding up processes. Trucks move an estimated 85% of shipping containers, and rail carry the remainder.

Meeting the Challenge: Port of Houston

The Panama Canal connects Houston to prominent global regions like Central and South America and Asia. An estimated quarter of the port’s container business comes from Asia and it’s expected to grow 5-6% in the next few years.

Some of the largest US ports, by tonnage, are located on the Gulf Coast. Houston is one of the 10 fastest growing ports for both imports and exports in the US. Houston ranks 2nd in the US in total tonnage.

US ports have a reason to expand and renovate. An Informa Economics study predicts that the US transportation network will have to evolve. The ability to unload larger ships will increase the need for distribution centers and warehouses in the eastern US. The new distribution centers will permit ocean carriers to add more ports to call. The flow of traffic into, out of and through the United States will be altered. Port operations, which are already inefficient, will need to make dramatic changes to handle the influx of freight.

Read Next: What Supply Chain Efficiency Will Mean in 2020