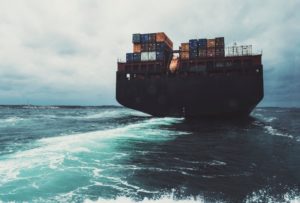 The Chinese economy drives demand for freight on the seas, and its economy’s existing weakness is weighing on the global shipping industry. Ocean shipping is necessary to the global economy, but shippers are experiencing somewhat of a crisis: low demand and surplus shipping vessels for hire. China’s slow economy is reducing demand for commodities like coal and iron ore, which affects dry bulk ocean transport.

The dry bulk shipping downturn began in 2008, after the beginning of the US financial crisis, and got worse in 2015 as the Chinese economy weakened. 2009 was the worst year on record for container shipping: the industry lost $20 billion.

Then, as Chinese business picked up, shipping companies ordered huge vessels in anticipation of demand from China and its stable, growing economy. But, that anticipated growth never came, and in 2014, shipping companies had huge ocean transport fleets but only a small demand for goods.

In 2015, there were a record number of ocean vessels, the same year the Chinese economy, the world’s second largest, grew at its slowest rate in 25 years. Since the second half of 2015, there has been even less demand for dry bulk goods in China. The Chinese economy remains way below economic expectations, said Symeon Pariaros, chief administrative officer of Euroseas.

Shipping brokers estimate 690 dry bulk ships, or about 7% of the global fleet, are sitting idle. The idling vessels are proof of the falling demand for commodities in China.

The Baltic Dry Index (BDI) tracks shipping rates for major bulk commodities across multiple shipping routes. The BDI made history with more record lows than any other year in its 30-year history. In December 2015, the BDI fell to an all-time low of 471 points.

It’s predicted that demand in 2016 will continue to drop in the amount of coal, grain, iron ore and other bulk commodities shipped. Vessel supply growth is expected to outpace demand growth in 2016 by more than 2% which is likely to keep freight rates low, specifically for dry bulk and container ships.

More Posts on this Topic: